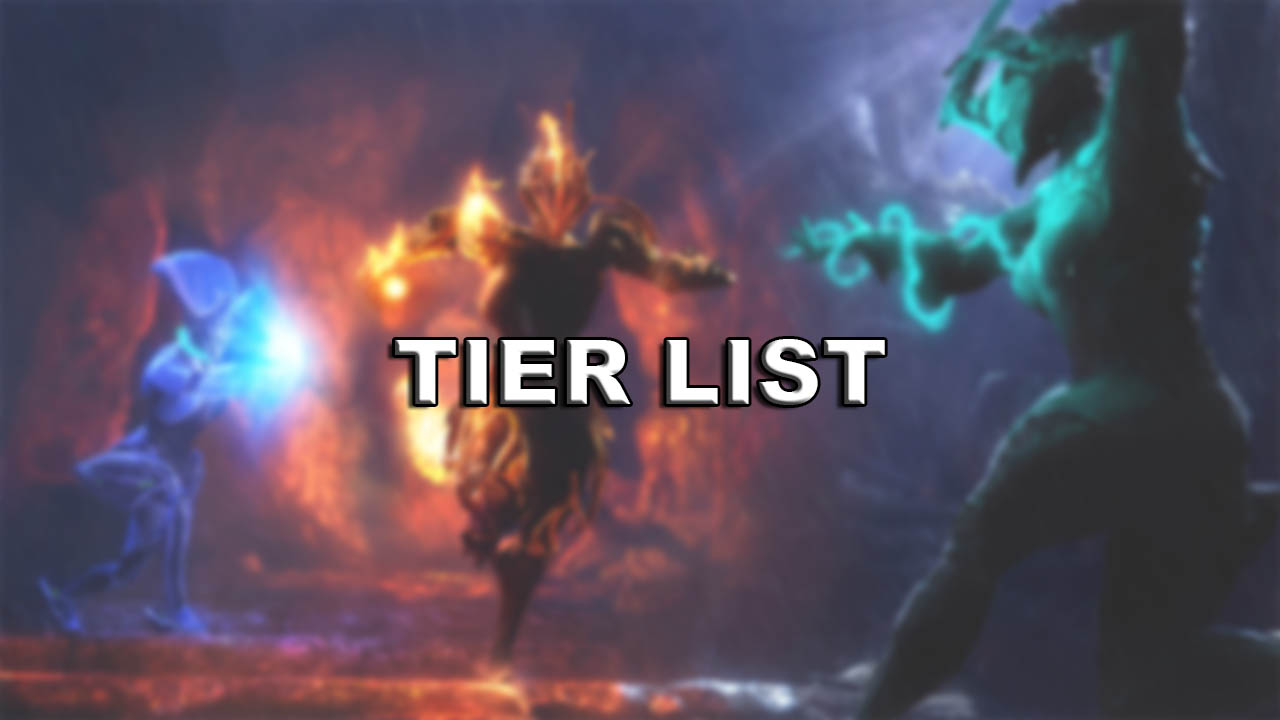 Warframe Tier List – What is the best Warframe? – This is a question that arises in almost every Tenno, there are so many to choose from. Players who have lower mastery rank/less experienced in the game face difficulties while choosing the best frame.

Answer From a Veteran: I would say that there is no such thing as the best frame in this game. Every player has a different playstyle, which is why modding is a huge part of the game. There are different scenarios in which you might have to choose a different frame to complete a mission easily. For example; if you are playing a defense mission, I would recommend the team to use a setup with Trinity Energy Vampire build (for unlimited energy) and Banshee Resonating Quake build (for killing enemies at range).

As I said earlier, there is no best frame in the game, but I will still categorize Frames according to various scenarios/mission types

Best Overall frame for Every Mission?

A frame that can deal damage…

or give buffs to teammates?

can become invisible and grant invisibility to teammates?

One of the best frames in the game, hands down. Since the release, this frame has been my go-to. Absolutely melts down enemies with her Mallet, the cool thing is that enemies stop shooting as soon as you spawn the Mallet.

Below I have listed the best frames in the Tankiness category.

The Egyptian god is not liked by many, but the frame can take any kind of beating and can still survive. The Scarab armor is one of the most powerful ultimate in the game. The frame also would be my #1 in terms of survival since you can literally eat your enemies to restore your health. Also, you can Darude sandstorm your way out of almost every fight.

Rhino was one of the first frames that were introduced in the game. The frame was literally so tanky, that DE had to debuff it a little bit. Almost everyone that plays this game knows about Rhino and Iron Skin.

If you want to play a frame which offers both tankiness and damage, then Nidus should be your choice. This infestation based frame had seen its peak when it could heal the objectives, gone are the days though. Talking about Tankiness, this frame excels at it, you can leech the armor/health of an enemy using Parasitic Link, whatever damage you take is reflected towards that enemy.

These were some of the best tanky frames that you can use in the game. I might have missed a few such as Valkyr, Oberon and such. I particularly don’t like those frames in terms of tankiness since they are affected with duration/energy.

Time to clear some planets?

Let’s find out what the best damage dealing frames are

Banshee and Resonating Quake is one combo that I can never stop using. I used to do fast defense missions using Banshee to farm relics easily. Another useful ability that Banshee offers is “Sonar”, this ability reveals all critical weak spots of the enemies.

Banshee is amazing at dealing damage at all times but is extremely squishy. You might need help from your teammates for surviving in high-level missions.

Mesa’s 4 is so powerful that you can literally clear a room full of enemies with a few clicks. The only thing is that you might run out energy within many times. I love running the peacemaker build with Arcane Energize, thanks to the unlimited energy supply you will never run out of fun time shooting enemies.

You cannot obtain the primed variant anymore, the non-primed variant will work fine though. The fastest frame in the game when modded right, the frame can stay invisible for the longest duration. You can also use Loki for CC, combined with Irradiating disarm augment and a little range, enemies will start fighting with each other without any weapons.

But Loki is rarely used for anything other than Spy or sabotage missions. But the choice is yours, use whatever you like.

Ivara is a huge pain to farm, you really have to learn to speed run spy missions to obtain this frame. But once you have it, spy missions become a piece of cake.

Once you obtain Ivara, just buy the Infiltrate augment from the syndicate vendors. Using Infiltrate + Prowl you can pass through any security barriers such as lasers without being detected.

Is there a Meta in Warframe?

I’ve been asked this a lot of times, hey what is the meta nowadays? – Warframe never had and never will have any meta. I have already written multiple times that you can play with whatever frame you like unless you’re a Limbo :P.

My conclusion for the sake of the tier list are these:

(Judged based on Survivability and all-round usage in every mission)

I have not listed a few frames in the tier list above because I couldn’t find their fit in the list. Frames like Nekros & Hydroid can’t be put in tier lists since they have a niche use. Please keep in mind, these are my thoughts and these do not change anything. Play with whatever frame you like.

I will be updating this list time by time, drop your suggestions for lists so that I can create more of these. Some more lists like Best Support Warframe, Best CC Warframe are coming up soon, in the process of writing them now.